When you put up your Christmas tree this year, spare a thought for the importance of trees in the world.

Forests cover a large portion of the planet;approximately 30% of the land surface! The map below shows forest cover across the planet in 2010 (FAO 2010 http://www.fao.org/forestry/fra/fra2010/en/). This map highlights the different types of forest biomes, each of which have their own characteristics. 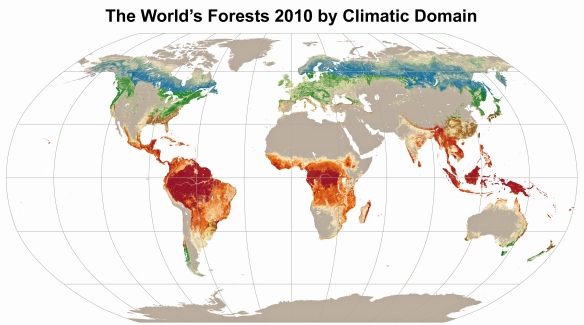 Whilst forests present us with some of the most beautiful scenery in the world, they aren’t just there to look pretty at Christmas. Forests provide us with many things that we maybe aren’t aware of, or take for granted; these are often referred to as “ecosystem services”. Some of the most important services are summarised here:

Arguably the most important role that forests play in relation to climate change is the impact of photosynthesis upon atmospheric carbon and the greenhouse effect. 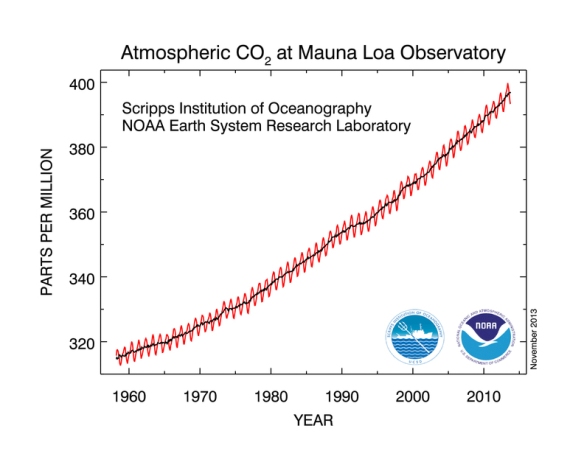 This is possibly the most famous graph in relation to climate change (alongside the ‘hockey stick’). This is the ‘Keeling Curve’; it demonstrates atmospheric carbon dioxide concentration measured at Mauna Loa, Hawaii. The reason why this is so important for conveying the concept of global climate change is that these are continuous measurements, carried out over 50 years, and the rising trend can be seen even without a full statistical time-series analysis.

Carbon is one of the most abundant elements on the planet. A quarter of all carbon on the planet is stored in the terrestrial biosphere. All living things contain at least some carbon, and trees are no different. (See the proportions of the global carbon cycle in this graphic by Iain Woodhouse).

The above graph has another interesting feature which highlights the role of forests, and that is the annual rise and fall of CO2 concentration. This is due to the seasonal ebb and flow of photosynthesis, where more carbon is absorbed during the summer months, and carbon is emitted during the winter. This is primarily due to the boreal forests of northern Eurasia and America, as these have a very distinct phenology in comparison to tropical forests. You can see this in action in some great animations at this blog;  (a small example is shown below).

Great animations from this blog: http://uxblog.idvsolutions.com/2013/07/a-breathing-earth.html

During photosynthesis plants take in carbon from the atmosphere, and use it to grow leaves, branches, stems and roots. Although the actual figure is uncertain, it is estimated that 30% of anthropogenic carbon dioxide emissions are absorbed by forests! This is known as the ‘forest carbon sink’. All this living tissue is known as biomass, half is water (known as the ‘wet biomass’), and approximately 25% carbon. Approximately 90% of biomass is stored above the ground, and is the component of biomass that is easiest for us to measure.

Christmas tree created by Carbomap Ltd. with Blender 2.69, inspired by Andrew Price’s tutorial “How to make a Christmas tree” on Blender Guru.

2 thoughts on “Why are forests so important?”